In our sixth episode of Dreaming With…at The Algonquin Hotel, Adam interviews singer/songwriter Blake Pfeil, and Jefferson interprets Blake’s emotional dream of family & Carole King. Blake will be performing his own spin on Joni Mitchell’s BBC 1970 concert this Sunday, November 20 at 7pm at Rockwood Music Hall Stage III in NYC (196 Allen Street). Blake has written & will perform a new song as a mirrored response to each of the songs sung by Ms. Mitchell during the famed BBC broadcast. Tickets available here. 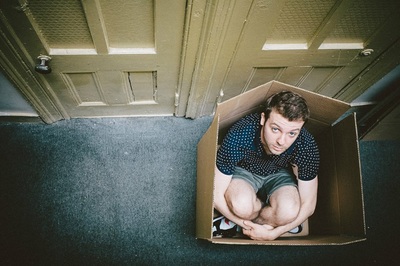 Blake’s Credits – Blake Pfeil’s Wallpaper debuted on iTunes and across the boards in November 2014, with a follow-up Manhattan-based tour The Papering Sessions which Playbill.com dubbed one of the “Most Unforgettable Theatrical Experiences of 2014.” The subsequent video Wallpaper, was released in March of 2015.

Blake’s music has been widespread on the club scene in New York City, with headline appearances at Joe’s Pub, Rockwood Music Hall Stage II, Feinstein’s/54 Below, and his favorite club The Bitter End, as well at larger venues like the Highline Ballroom. He has collaborated with some of Broadway’s finest talents, including Tony-nominees Bryce Pinkham and Robin De Jesus, as well as Jason Gotay, Rebecca Faulkenberry, Coleen Sexton, among others.

Blake’s song Queen and music video, starring Robin De Jesus, was used by GLAAD as part of the 2013 Gay Pride Celebrations, and his song Your Coffee, co-written and performed with Ms. Rachel Gavaletz, was a finalist in the 2015 Coffee Music Project. He is at work on the development of a couple theatrical projects, to be announced soon. Blake is also a proud member of Actor’s Equity.

If you would like to donate to support Blake’s father’s medical costs,
visit his GoFundMe page here.

This entry was posted in Episodes. Bookmark the permalink.